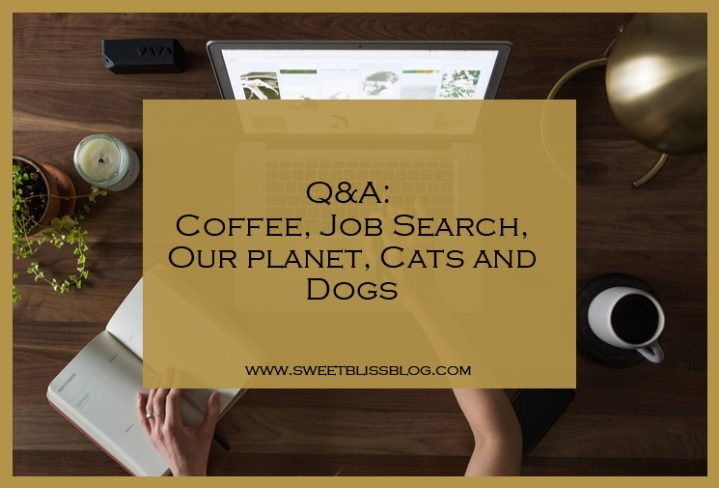 This is a fun “life lately” type of post made up of questions others have asked me lately.

In the last two weeks, I’ve been either on a or phoned into a half-dozen job interviews, and they’ve all had one thing in common: so many questions—which makes a lot of sense. In that time, I’ve also been asked countless questions from friends, prospective dates (hi, Hinge), my mom, and even my doctor. So today I thought of putting together a Q&A based on some of those questions. 🙂

Anything you’ve been asked lately that made you stop and think? Tell me, I’d actually love to know!

What happened to your thumbs? – Friend on WhatsApp

Well, “friend on WhatsApp” after I told him I was misspelling absolutely everything that morning because my thumbs were out of commission. It’s true! I’ve noticed that lately, the muscles surrounding my thumbs need a good warmup (texting or just…using my hands for daily tasks) before they’ll move and bend to my will. So texting back before 8 a.m. has been pretty risky business.

But it turns out this is a thing. Rush University has a page dedicated to the modern-day ill named “texting thumb.” Apparently, in the US, the average person spends 23 hours per week texting, and I am sure it’s no different in many other parts of the world. So it’s no wonder there’s a whole new injury to describe what is collectively no doubt the entire world’s most used muscle group (the thenar eminence).

What’s the exterts’ advice? Get some thumb rest and stop texting. There, there!

Are you staying away from the coffee?  – My family physician

I usually lie when any authority figure asks me this question (as in, my doctor). But this time, I could rest easy and tell the truth. The truth is, yes, I am—sort of!

I’ve been drinking a cup of decaf every morning and afternoon, and even though I did have a headache for a couple days, that’s gone. Incredibly, I feel the same activation and boost following a cup of decaf compared with when I drank regular coffee. Placebo is a real thing; it must be because decaf coffee has only about 1/10 of the caffeine content as regular, and I used to drink several cups of full-caf per day. For the record, I’ve noticed absolutely no benefits from making the switch. But if you need to, I’ve been drinking Nestle’s instant coffee (decaf) with soy milk and a packet of stevia. Not bad.

The bad news is that there are few reliable, randomized controlled trials that set out to find out if decaf is better for us than caffeinated coffee, and this is probably something to be grateful for (there are better things for anyone—even coffee companies—to spend money researching, right?). The good news though is that both real coffee and decaf are full of antioxidants!

Cats or dogs? – Some guy on Hinge

I’ve always fancied myself a cat person. I didn’t have much interaction with any puppies until I was about 16, when my family got one, and even though I hadn’t owned a cat, either, I’d seen lots of strays in Iran (and even fed some).  But since Casper, the question’s been harder to answer. So, I’d say these days, it’s cats and dogs.

According to a study quoted by Live Science, which you prefer might say something about your personality type. Cat people tend to be nonconformist loners and dog people are outgoing and energetic. Is anyone surprised?

Why do you want to leave your job if you find it so meaningful? – COO of X company @ job interview

It comes down to three things. The first is that I never wanted to be an editor; I fell into that. Falling into a competitive field like book publishing seems so unlikely and so cruel for those people ready to stomp over anyone to get a foot in, but it’s also completely true in my case. I just somehow got a job as a proofreader (full disclosure: I did apply). On the flip side, I’ve wanted to be a writer (nondescript) since I was about 16, so it makes sense for me to finally want to make the switch, even if I have to write about windows and doors.

The second is that the romance book publishing world trades in a lot of misogynistic narratives. It feels icky to be part of an industry that helps women limit themselves. This isn’t the publishers’ fault; they’d be happy to sell more empowering stories if they would sell, but that’s just it: people love the whole “love conquers every problem” storyline. Usually the love of a good-looking tycoon or a cowboy with an impossible six-pack and a heart of gold.

And the third thing is that editing pays even less than writing, which only pays well in a few roles, and have you seen housing prices? I would probably work any job I could for a significantly better salary, and I’m probably not alone.

This post from the The Society for Human Resource Management states that according to survey results, compensation is increasingly the primary factor determining job satisfaction among employees, likely because of the stagnating wages dominating the job market of the last couple of decades. The article is a few years old, but I’m including it because it’s talking about underlying factors (causing the trends) that haven’t changed—particularly stagnant salaries.

How did they film this? – Mom while watching Our Planet on Netflix

Our Planet is the newest hottest show on Netflix. It’s an eight-part docu-series created by the people behind BBC’s Planet Earth and some of the shots might be even more stunning and awe-inspiring than the latter. You can watch a trailer here.

It took four years and more than one camera crew, starting in 2015, to film the series that would be narrated by David Attenborough’s iconic voice.

Even though I found some of the ocean wildlife scenes to be the most incredible, it’s the glacier calving shot that has attracted the most media curiosity. And I think the crew’s strategy for getting that shot probably amounts to a good glimpse of how the entire series was filmed: lots of (and repeated) trips on location to film while waiting for a particular natural event that might never happen. Basically, a lot of patience.

How Netflix’s “Our Planet” Shot its Most Harrowing Scene